“Some traditional forms of democracy are alienating more and more people”

“Some traditional forms of democracy are alienating more and more people”

As Executive Head of the United Nations Democracy Fund (UNDEF), Annika Savill manages a UN Secretary-General’s Trust Fund that strengthens the voice of civil society, promote the rule of law and human rights, and encourage the participation of all groups in democratic processes. Before joining UNDEF, Annika Savill served in the Executive Office of the UN Secretary-General from 1997 to 2008, working under Kofi Annan and Ban Ki-moon as the Secretary-General’s speechwriter and a senior member of his communications team. Sven Lilienström, founder of Faces of Democracy, spoke with Annika Savill about democracy, gender equality and the projects on which UNDEF will focus this year. 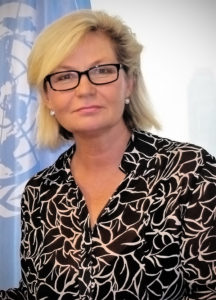 Ms. Savill, the Faces of Democracy initiative wants to support a better understanding of democracy around the world. How significant are democracy and democratic values to you personally?

Annika Savill: I grew up in six countries on three continents, some of them at that time newly independent from colonialism, some of them undergoing profound and turbulent change. This first-hand experience instilled in me, from a fairly early age, a conviction that the most successful societies are those underpinned by democratic institutions and the rule of law; that true stability can never come from repression; that social and economic progress are far more likely to take hold if people are given a genuine say in their own governance, and a chance to share in the fruits of progress.

Globalisation, digitalisation, migration and climate change are big challenges for governments worldwide. What are the projects and topics on which UNDEF will focus in 2019?

Annika Savill: Globalization has left in its wake a huge swathe of unhappy people around the world. Twenty years ago, my former boss, the late Kofi Annan, warned that unless the benefits of globalization were shared more fairly, all the “isms” of the 20th century would come back – the isms that exploit the insecurity and misery of people who feel victimized by the global market: protectionism; populism; authoritarianism; nationalism; ethnic chauvinism; fanaticism; tribalism. The more wretched people there are, the more those “isms” will continue to gain ground. And this is where we are today.

Domestic politics and geopolitics are challenging globalization as a dominating force, so the pendulum is starting to swing back towards nationalism and nativism.

Now, domestic politics and geopolitics are challenging globalization as a dominating force, so the pendulum is starting to swing back towards nationalism and nativism – with all the challenges that this brings in terms of weakening the global rules book. Instability brought about by climate change and conflict-driven migration are also exacerbating these trends.

Against this backdrop, UNDEF works directly with the men, women, and youth who make up civil society – the oxygen of democracy – often in collaboration with state and private-sector actors, but always independently of them, designed at the grassroots to address democratic deficits and freedoms denied. We are demand-driven, not supply-oriented.

For 2019, UNDEF is exploring yet more new ways to make democracies more inclusive by bringing the young, the poor, and the marginalized into the political system.

For 2019, UNDEF is exploring yet more new ways to make democracies more inclusive by bringing the young, the poor, and the marginalized into the political system. A striking example: some societies have piloted initiatives for citizens’ assemblies on specific issues, with members not nominated by political parties, but chosen at random for a limited term to represent all sectors of society. The idea is to prevent the perpetuation of a self-serving political class disconnected from the electorate. Such citizens’ assemblies are used to consider questions in a thorough, factual and dispassionate way, on subjects that can otherwise become drastically and fatally polarizing. Think, for instance, of the groundbreaking Irish assembly that studied the question of abortion and paved the way for the 2018 referendum legalizing the procedure. UNDEF’s initiative aims to enable more countries to develop citizen assembly initiatives of this kind.

Anti-media rhetoric and politics increasingly appear to be becoming acceptable again – even in democratic countries. How do you assess this development and what experiences have you already gained in this context?

Annika Savill: There is a range of countries where governments or segments of society no longer see an independent and impartial media as an essential part of democracy, but rather, as an adversary to be overcome. This undermines the prospects of public debate based on facts, and opens more space for propaganda. Added to that is the increasing and appalling rise in violent attacks against journalists, as well as arbitrary detentions.

Many consumers have lost the ability or will to read critically and examine sources correctly.

Other factors are the fertile soil this lands in, and the way some of media tills the land. Many consumers have lost the ability or will to read critically and examine sources correctly; to show basic discernment in distinguishing between a verbatim quote and a loose description of a statement attributed to someone; to look for the presence of a reliable witness or testimony; to tell the difference between fact and impression.

Social media creates echo chambers where prejudice is confirmed rather than challenged.

Many media outlets turn news into entertainment and focus on celebrity click-bait. Social media creates echo chambers where prejudice is confirmed rather than challenged. UNDEF has always conducted projects that strengthen independent media and develop the skills of journalists in even the most challenging circumstances. This has become an increasingly significant part of our work.

The independent “Freedom House” think tank has established that democracy is currently facing its most serious crisis in decades. Do we have to change democracy to defend it?

Annika Savill: Some traditional forms of democracy are alienating more and more people.

Many people assume democracy can self-correct to accommodate a changing electorate.

Yet many of the same people assume democracy can self-correct to accommodate a changing electorate. This is probably no longer so, if it ever was. Many aspects of today’s political system are unresponsive to the need for real change. It often builds on a belief that free and fair elections are the sole essence of democracy, even in cases where political campaigns are reduced to personal attacks and petty squabbling, and political parties are driven by self-perpetuation and self-interest. So yes, some aspects of democracy need a rethink. For example, see my point about citizens’ assemblies under question 2 above.

Women and Democracy: Equality is an important democratic principle. But women are still underrepresented in parliaments. Does democracy need more feminism?

Until we have equality in all those, democracy needs more feminism.

It goes to the labour market, academic institutions, civil society and media. Until we have equality in all those, democracy needs more feminism. Gender equality is also a prerequisite for meeting all the Sustainable Development Goals, the blueprint agreed by all the world’s Governments to achieve peace and prosperity for people and the planet.

In some societies, women are still treated as barely more than the dirt under a man’s shoe.

UN Deputy Secretary-General Amina J. Mohammed calls gender equality the “docking station” for all the Goals. Without it, we will perpetuate today’s paradigm: trying to address all the world’s challenges with only half the world’s assets. Yet in some societies, women are still treated as barely more than the dirt under a man’s shoe.

Critics fear that the UN migration pact is an invitation to economic migrants and people escaping poverty to take advantage of western social systems and is a threat to national sovereignty. Do you share these fears?

Annika Savill: The Global Compact for Migration is the first inter-governmentally negotiated agreement to cover all dimensions of international migration in a comprehensive manner. But there is a great deal of confusion about the Compact and what it does or does not do. The Compact is entirely voluntary, and not legally binding. It explicitly “reaffirms the sovereign right of States to determine their national migration policy and their prerogative to govern migration”.

The Global Compact for Migration has been reviewed by a number of national parliaments, which all concluded it posed no threat of undermining sovereignty, nor even of creating soft law of any significance.

The Compact has been reviewed by a number of national parliaments, which all concluded it posed no threat of undermining sovereignty, nor even of creating soft law of any significance. The reaction against the Compact must therefore be assumed to reflect more emotions than fact. See my point under question 3 above.

Ms. Savill, our seventh question is always a personal one: what do you like to do most of all in your leisure time and what objectives have you set yourself for the next five years?

Annika Savill: My husband and I spend most of our free time by the Atlantic Ocean. We swim there as often as we can. It’s an ocean I’ve known since I was five, then from West Africa, now from eastern America.

Over the next five years, I want to explore a theory of mine – the link between global language groups and democracy.

My peripatetic life has made me think about connectivity and language. Over the next five years, I want to explore a theory of mine – the link between global language groups and democracy. Do some languages make a population more connected with the world at large, and thereby better built for democracy? Conversely, do some language groups isolate whole regions by being too self-contained, thus caged in a linguistic echo-chamber and stuck in a sclerotic system?

Ms. Savill, thank you very much for the interview!