“Democracy is the foundation of civil engagement!”

“Democracy is the foundation of civil engagement!”

Clover Moore (73) is the longest serving Lord Mayor of Sydney, currently in her fourth term. She is the first popularly elected woman to lead the City of Sydney. As Lord Mayor, Clover has led the development and implementation of the City’s internationally renowned long term plan – “Sustainable Sydney 2030”. The plan includes ambitious targets to reduce greenhouse emissions. Sven Lilienström, founder of Faces of Democracy, spoke with Lord Mayor Clover Moore about Australia’s refugee policy, right-wing populism and the Sustainable Sydney 2030 project. 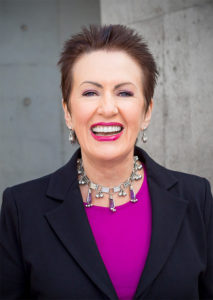 Lord Mayor, the Faces of Democracy initiative wants to support a better understanding of democracy around the world. How significant are democracy and democratic values to you personally?

Clover Moore: Democracy is the foundation of civil engagement. As the first popularly elected female mayor of Sydney and the longest serving woman in the NSW Parliament, I know how important it is to have genuine representation at every level of government. But as an independent and a woman it’s been tough!

Democracy is the foundation of civil engagement!

Some of the reforms that I’ve pushed for have taken years to achieve and I’ve had to withstand incredible pressure and criticism from right wing media and vested interests but I believe in what I do. Democracy relies on being bold and courageous and acting on principle.

Speaking with right-wing populism in mind: A democracy is only as strong as the democrats who support it. How vulnerable are democracies to being undermined by democratic means?

Clover Moore: I think the rise of right-wing populism we’re seeing around the world is a real threat to democracy.

I’m proud that here in the City of Sydney, we’ve had independent, open, accountable and corruption-free government for the past 14 years, and we involve our communities in decision making at all levels.

I think the rise of right-wing populism we’re seeing around the world is a real threat to democracy.

I believe democracy comes with rights and responsibilities, and I encourage everyone to participate on issues that matter – that’s how we can protect our democracies from being undermined.

Media-hostile rhetoric, restrictive laws and political interference in democracies contribute to a worsening of the situation of journalists worldwide. Is press freedom under threat in democracies?

Clover Moore: We need objective, strong, investigative journalism. The press is clearly under stress from vested interests and fake news. As a society we must demand that journalists are able to continue reporting the facts freely and without fear of consequences.

Five years ago Australia imposed a general ban preventing boat refugees from entering the country. As a signatory to the UNHCR’s #WithRefugees campaign, what is your view of your country’s refugee policy?

Clover Moore: I am ashamed and appalled about our Federal Government’s refugee policy.

The City of Sydney is a „Refugee Welcome Zone“ and we have messages on banners, billboards and buses throughout our city that say “Refugees are Welcome!” It has been heartwarming to hear from refugees and asylum seekers that these efforts have helped them to feel accepted in their new homes.

I am ashamed and appalled about our Federal Government’s refugee policy!

It’s important for us to recognize, support and celebrate the many and varied contributions refugees and asylum seekers bring to our city.

The Sustainable Sydney 2030 project aims to make Sydney greener, more global and more connected. What can other major cities learn from Sydney when it comes to sustainability?

Clover Moore: Despite disappointing inaction from our Federal and State Governments, the City of Sydney has developed a global reputation for championing sustainability and being one of the world’s most livable cities.

That’s because when we developed our long term strategic plan Sustainable Sydney 2030 back in 2008, we consulted with thousands of residents, businesses and visitors – 97 per cent of whom told us they wanted action on climate change. We set ambitious targets including reducing the greenhouse emissions of our own operations and the local government area by 70 per cent based on 2006 levels by 2030 and took the action.

Despite disappointing inaction from our Federal and State Governments, the City of Sydney has developed a global reputation for championing sustainability and being one of the world’s most livable cities.

We believe that the most reliable way to achieve the emissions cuts and resource efficiencies is through collaboration with the community, the private sector and other government organizations. Our partnership with commercial properties in our city has reduced emissions by 52 per cent and water use by 36 per cent since 2006, and we are also working with the wider property industry to transition to net zero buildings.

We’re now starting work on Sustainable Sydney 2050 – kicking off a huge program of consultation once again. All cities can learn to listen to their residents and, most importantly, take action on the issues that important to their communities.

Lord Mayor, our seventh question is always a personal one: what do you like to do most of all in your leisure time and what objectives have you set yourself for the next years?

Clover Moore: Peter (my husband) and I love to spend our weekends with our two “staffies”, Buster and Bessie – often at a community festival or opening of one of our City of Sydney community facilities! Bessie is part kelpie and is always rounding us up to take the family on a walk through one of our beautiful parks. As for my objectives for the coming years, I will continue to be a representative and champion for local issues, and serve my local community.

Lord Mayor, thank you very much for the interview!