Dr. John J. Hamre is President and CEO of the Center for Strategic and International Studies, the world’s number one Defense and National Security think tank. Before joining CSIS, he served as the 26th United States Deputy Secretary of Defense. Prior to holding that post, he was the Under Secretary of Defense from 1993 to 1997. In 2007, Secretary of Defense Robert Gates appointed Dr. Hamre to serve as chairman of the Defense Policy Board, and he served in that capacity under four Secretaries of Defense. Sven Lilienström, founder of Faces of Democracy, spoke with Dr. Hamre about NATO, hybrid warfare and the INF Treaty. 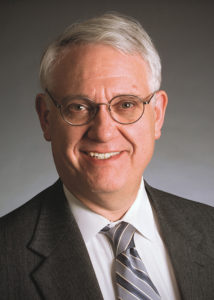 Dr. John Hamre, President and CEO of the Center for Strategic and International Studies | © CSIS

Dr. Hamre, the Faces of Democracy initiative wants to support a better understanding of democracy in Germany, Europe, and around the world. How significant are democracy and democratic values to you personally?

John Hamre: I have spent my personal and professional life in the national security field to protect democracy and democratic values during the Cold War. Unfortunately, the challenge to democracy from authoritarian countries has returned, and it must again be my primary conviction for the rest of my professional life.

Terrorism, cyber-attacks and hybrid warfare: The global security architecture is facing a range of new challenges. How do you assess the current security situation?

John Hamre: The current era poses far more complex security challenges than did the Cold War. The prospect of major war for the United States is low, though we are back into a world of peer competitors.

Cyber-attacks are the most challenging single problem, in my view!

The more likely security threats come from hybrid warfare and cyber-attacks. Cyber-attacks are the most challenging single problem, in my view. The cost for the attacker is quite low and there are serious problems of attribution. Most modern societies are quite vulnerable because of the large installed base of software that was not designed with security in mind.

In a global environment marked by disintegrating structures and numerous conflicts, NATO is an anchor of stability. How united and cohesive is the Alliance in 2018?

John Hamre: Russian aggression in the Ukraine has brought a focus back to NATO.

European defense capabilities are still very uneven, and should be a focus as we strengthen NATO together.

For many years, NATO was drifting, but Russia’s actions have again brought clarity to its role and purpose. European defense capabilities are still very uneven, and should be a focus as we strengthen NATO together.

The cohesion of the European Union – one of the most successful supranational peace projects in the history of humanity – is diminishing. What happens if Europe fails?

John Hamre: In my view we can’t let the European Union fail. It is seriously challenged, to be sure. But it is absolutely critical for the success of Western values. The United States needs to be supportive of efforts to strengthen the EU, but it is primarily Europe’s responsibility to modernize the structure and strengthen its legitimacy with citizens.

The US is considering a withdrawal from the INF Treaty on the abolition of nuclear medium-range missiles. What does this mean for security in Europe? Is there a threat of a new arms race?

John Hamre: Since you sent this e-mail, President Trump has indicated his plans to withdraw from the INF Treaty. There is a procedure for this. There is a remote possibility that Congress will block this in some way, but I suspect it will not.

Russia has been violating the INF Treaty for several years!

Russia has been violating the INF Treaty for several years. Personally, I wish we had mounted a more vigorous effort to confront Russia with the violation and hold on to the Treaty. But it appears we are walking away from it. I do not think it will trigger a new arms race.

“Trident Juncture 2018” is NATO’s biggest exercise since the end of the Cold War. Has the likelihood of a case for the alliance increased with the annexation of the Crimea? Is a new Cold War imminent?

John Hamre: Unfortunately, Russia’s relations with Europe and the USA are at the worst I have seen in 20 years.

Russia’s relations with Europe and the USA are at the worst I have seen in 20 years!

Russia has chosen a path of covert interference in the political institutions of Europe and America. That is very real and sustained. We are in a long-term competition with them again.

Dr. Hamre, our seventh question is always a personal one: what do you like to do most of all in your leisure time and what objectives have you set yourself for the next years – professionally and privately?

John Hamre: Woodworking is my hobby. I am now building clock cases and giving them away to friends. There is something timeless about mechanical clocks, and I want to thank people who have meant so much to me in my life with a gift that will outlive all of us.

Dr. Hamre, thank you very much for the interview!