As one of Europe’s leading economic research institutes, the ifo Institute forms a bridge between academic research and public discourse. Ifo is a non-profit organisation focused on applied economic research with clear policy implications with a view to achieving greater stability, prosperity and cohesion for Europe and the world. In line with this goal, it publishes the monthly ifo Business Climate Index, a high-profile indicator of economic developments in Germany. Sven Lilienström, Founder of the Faces of Democracy Initiative, talked to ifo President Professor Clemens Fuest about democracy, brexit and populism. 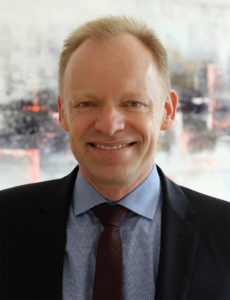 Professor Fuest, the first question in “Faces of Democracy” is always: how important are democracy and democratic values to you personally?

Professor Clemens Fuest: Democracy combined with the rule of law is the only type of public order that allows people to live in freedom and prosperity.

Democracy is not a perfect system, but there is no better form of public order, and a lot of systems are far worse!

I am grateful that I live in a functioning democracy and consider myself very fortunate and privileged to do so. Democracy is not a perfect system, but there is no better form of public order, and a lot of systems are far worse. I would be prepared to personally defend our democracy and the values that it stands for like human dignity, equality before the law, freedom of opinion etc.

Europe is the world’s largest economic area: is the EU strong enough to provide a united response to the growing economic and fiscal policy challenges that it faces? What will happen if Europe fails?

Professor Clemens Fuest: The EU is like democracy: it definitely has its weaknesses, but the EU is the best way to ensure the peaceful the only concept that has worked to date. We mustn’t let the EU fall apart.

Let me remind me of your own words. You said: “When I saw what had happened it was clear to me that Europe had changed fundamentally overnight.” How do you see the current state of the Brexit negotiations?

Professor Clemens Fuest: The situation is bad. Neither side seems to have a compelling idea of how to avoid a hard Brexit with immeasurably negative consequences for both sides. But I haven’t given up hope that it is still possible to avoid chaos from breaking out in March 2019 through a longer transition period.

Populism has become a buzzword. Is it possible to recognise a “typical” populist by his/her economic policy demands, and if so, what do you advise voters to do to avoid falling into the populist trap?

Professor Clemens Fuest: Populists claim that society consists of two groups: the large majority that has homogeneous interest, and a corrupt elite that exploits the population. Populists claim that they will end this exploitation if they are elected to government. Populists specifically exclude certain groups, which they see as belonging to these elites, from society.

Populists also claim that immigrants, international trade and international capital flows and international organisations are responsible for domestic economic problems; and that protectionism and isolation will solve these problems. They ignore public budget constraints and promise voters all kinds of benefits if they gain power. Populists offer simple solutions to complex problems. It is also important to bear in mind that the behaviour of many politicians and parties has populistic aspects, and not just that of those usually labelled populists.

The accession of Turkey under President Erdogan to the EU is almost off the table already. What would be the economic consequences of finalising an end to EU accession partners for all concerned?

Professor Clemens Fuest: Since Turkey’s accession to the EU currently looks unrealistic, this would make very little difference to any potential membership.

The accession of Turkey is not being particularly intelligently debated by politicians on the German campaign trail.

As part of accession negotiations Turkey does receive financial support from the EU, which would be withdrawn. Positions would also become more entrenched – and the situation for EU friendly political powers in Turkey would be even more difficult. This issue is not being particularly intelligently debated by politicians on the German campaign trail.

According to reports in the media, the EU’s Economic and Financial Committee has heavily criticised the economic policy of US President Donald Trump. Does Trump pose a threat to the world economy?

Professor Clemens Fuest: Trump’s policy of opposing free trade represents a major risk to the world economy. This also applies to his withdrawal from international climate policy. Nevertheless, or perhaps precisely because of this, it is important to maintain a dialogue with him.

The USA remains one of our most important political and economic partners!

Many politicians compete in criticising Trump to score points with domestic voters. That could do serious damage, since the USA remains one of our most important political and economic partners.

Professor Fuest, our seventh question is always personal, but we have found very little information on your private life. What do you like to do in your free time?

Professor Clemens Fuest: I love to ski with family and friends.

Thank you very much for the interview Professor Fuest!