“Democracy is necessary to achieve fairer and freer societies!”

“Democracy is necessary to achieve fairer and freer societies!”

The Inter-Parliamentary Union (IPU) was founded 130 years ago as the first political multilateral organization in the world, encouraging cooperation and dialogue between all nations. Meanwhile the organization unites 179 national parliaments from all over the world and works closely with the United Nations. The IPU focuses on the protection of and respect for human rights, the promotion of peace, democracy, the rule of law, and sustainable development. Sven Lilienström, founder of the Faces of Democracy initiative, spoke with the President of the Inter-Parliamentary Union, Ms. Gabriela Cuevas Barron about democracy, multilateralism and the importance of the IPU today. 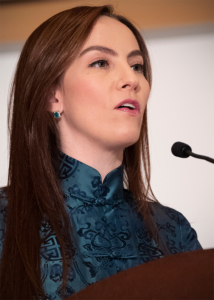 Ms. Cuevas Barron, the Faces of Democracy initiative wants to support a better understanding of democracy in Germany, Europe, and around the world. How significant are democracy and democratic values to you personally?

Gabriela Cuevas Barron: Definitely now more than ever! Parliamentarians must opt for paths and initiatives that foster multilateral cooperation.

The world needs to change and stop being so individualistic!

Democratic values support the belief that an orderly society can exist. The world needs to change and stop being so individualistic. As President of the IPU, I have been urging countries to realize that no single state can manage emerging global situations on its own. Cooperation, collective actions, and strengthened governance are crucial elements. I genuinely believe that change has to be done through democracy.

For me, democratic values and democracy itself are necessary to achieve fairer and freer societies.

The Faces of Democracy initiative seems to be one of the most important ones in these times, since it invites us – as you say – to understand democracy better; to understand it as a democracy that opts for freedom, that allow us to express our opinions and to have the power to be critical; that chooses plurality; a value that makes us empathetic to others, and a path that helps build equal societies.

So, for me, democratic values and democracy itself are necessary to achieve fairer and freer societies.

The IPU was founded 130 years ago as the first political multilateral organization in the world, encouraging cooperation and dialogue between all nations. What importance does the IPU have today?

Gabriela Cuevas Barron: The IPU facilitates parliamentary diplomacy and empowers parliaments and parliamentarians to promote peace, democracy and sustainable development around the world. We help strengthen parliaments to make them more effective and representative.

Although the defence and promotion of critical issues on the international agenda such as human rights, development, and gender equality are progressing, there is still a long way to go. The existence of international organizations, such as the IPU, is important and necessary since they generate essential links between nations and open spaces that allow international dialogue, exchanges of best practices, and overall cooperation.

The IPU is the main point for gathering worldwide parliamentary dialogue.

The existence of the IPU is paramount because it gives a voice and contributes to each nation having more and more tools to share ideas and participate in the dialogue of the international agenda, to achieve such important and necessary objectives in society. The IPU is the main point for gathering worldwide parliamentary dialogue, to keep working for peace and co-operation among people, and for the firm establishment of representative institutions.

According to the Conflict Barometer of the Heidelberg Institute for International Conflict Research (HIIK), the number of wars and conflicts around the world is increasing. Do we need more international cooperation?

War is back. Around 50 state-based conflicts happened in 2018!

War is back. Around 50 state-based conflicts happened in 2018; this fact is just an example of the importance to strengthen universal ties in a society that keeps increasing as fast as we are doing it. As the IPU President, I am very aware of the situation and we are working on sending specific missions to countries that are facing these exact conflicts, such as Venezuela, Syria and Turkey.

Multilateralism has been a very important foundation for the creation of international legal frameworks that have empowered our nations to face together the greatest challenges that the twenty-first century has brought. Starting from wars, eradicating poverty, fighting for human rights and now addressing climate change; these are just some objectives on which countries need to work together.

According to this idea, international cooperation is not only a tool but an answer to the complex phenomenon that it is: difficult to ignore and difficult to solve by itself.

The IPU stands for the inadmissibility of the acquisition of territory by war. Since November the USA no longer regards Israeli settlements on the West Bank as being in violation of international law. What does this mean?

Gabriela Cuevas Barron: The IPU respects the statutes of public international law as the right of self-determination of people, non-interference in their sovereign affairs, and the principle that any territorial conflict must be redeemed through legal platforms and peaceful tools, such as international mediation and negotiation and a permanent dialogue.

The IPU is planning to prepare a universal indicator catalog for parliaments. Why do we need standards for national, democratic parliaments and how realistic is the initiative?

Gabriela Cuevas Barron: International standards function as a homologation and harmonization in the systems that facilitate the interaction and integral functioning of our institutions. Having said that, the IPU believes that any institutional tool that helps us understand and address common adversity in a constantly changing global system will allow us to always be able to face the issues that may affect the citizens of the nations participating in the IPU.

According to a recent study conducted by the University of Edinburgh, most British people think violence against members of parliament is a suitable means in the Brexit dispute. Where does this hate for our government representatives come from?

Gabriela Cuevas Barron: It is better that we should rethink our governance models. While the planet has changed at high speed, parliaments are institutions that have centuries of history and it is time to renew them, make them more transparent, inclusive.

It is urgent to improve our responsiveness as parliamentarians!

And that also applies to executives; it is urgent to improve our responsiveness as parliamentarians. They represent the voice of the people. It is their duty to strength citizens’ confidence in their political agents and at the same time to enhance their capacities for decision-making for the sake of national and international welfare.

It is essential that politics responds to people and not to electoral campaigns or incentives of bureaucracies.

And that goes also for multilateralism; today it is urgent to renew our commitment and leadership for a global system that allows us to build and implement solutions, not as a supra national platform but as a space for dialogue and agreement where solutions for people are built. It is essential that politics responds to people and not to electoral campaigns or incentives of bureaucracies.

Ms. Cuevas Barron, our seventh question is always a personal one: what do you like to do most of all in your leisure time and what objectives have you set yourself for the next years – professionally and privately?

Gabriela Cuevas Barron: I must confess that I love exercising, listening to music and most of all – photography. As you can see in my social networks, I like to take a lot of pictures; and when I travel, the only thing that I can´t forget is my camera.

You wouldn’t imagine how many pictures I have in my house! Photos represent moments and bring back memories.

Ms. Cuevas Barron, thank you very much for the interview!