“Compromise is the essence of a democracy - no matter how epochal the challenge!”

“Compromise is the essence of a democracy – no matter how epochal the challenge!”

The civil engineer Lamia Messari-Becker (48) is Professor of Building Technology and Building Physics at the University of Siegen. Until June 2020, Moroccan-born Professor Messari-Becker was a member of the German government’s Advisory Council on the Environment. She is a member of Club of Rome International, which advocates a sustainable future for humanity. Sven Lilienström, founder of the Faces of Democracy initiative, spoke with Prof. Lamia Messari-Becker about democracy, climate protection and sustainability. 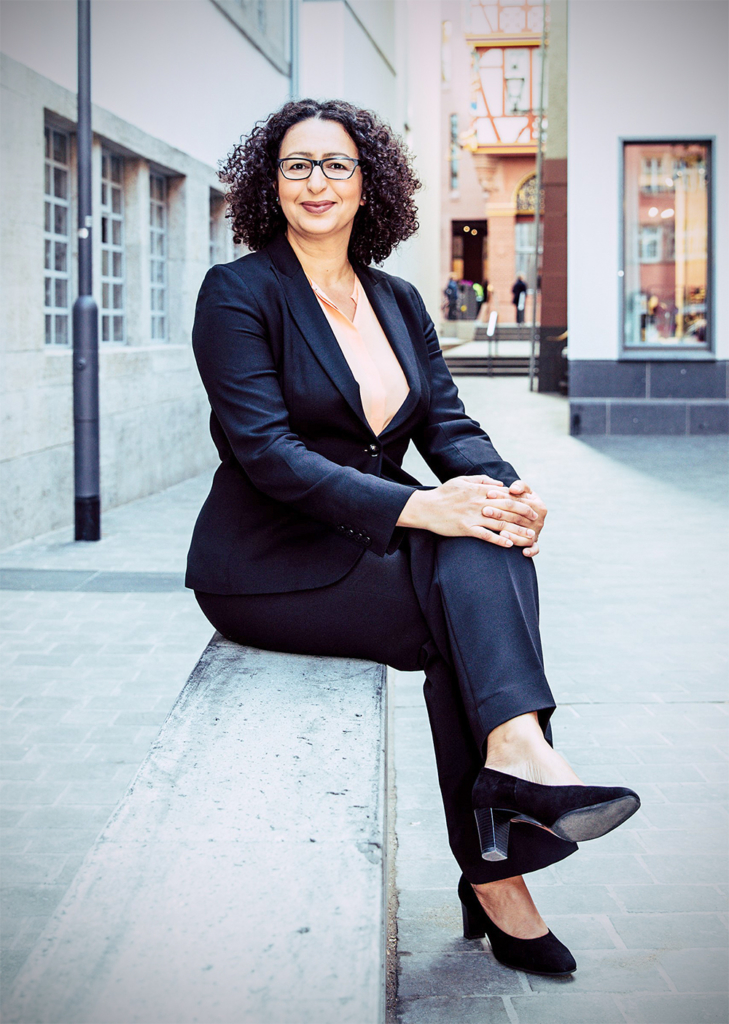 Prof. Messari-Becker, we are delighted that have won you over as a new “face” for the Faces of Democracy initiative. How significant are democracy and democratic values to you personally?

Prof. Lamia Messari-Becker: For me, democracy is the soul and backbone of a society that lives in freedom, peace and equality. Our Constitution provides the foundation and the tools with which we can solve challenges and make progress together. This is particularly evident in a crisis. We are in good shape and in my view, there is no better system.

Democracy must be filled with life and defended every day!

However, democracy must be filled with life and defended every day. The view that our constitution and the instruments of parliamentary democracy are not sufficient to shape the future is now coming from corners you would not expect it to. Here is an example I have experienced myself: In 2019, the German Advisory Council on the Environment called for a new Council for Intergenerational Justice to be set up that has a suspensive veto right over laws in parliament. The council often argued for the “good cause” with “threat, media echo, pressure on political decision-makers, coercion”. This alerted the Democrat in me! Where does such language, such an attitude, come from? I was and am strongly opposed to such a plan. I fear that basic democratic values are being taken for granted by many people.

Prof. Lamia Messari-Becker: A lot. Think of polarising construction projects and citizens’ initiatives that oppose them, of balancing different needs and competing urban development (housing, infrastructure, green spaces). On the one hand you have those who were elected, and on the other, those who put up resistance. Democratic basic values allow citizens to participate in urban development projects, weigh things up and ensure trade-offs.

When it comes to the question of “How do we want to live?” we need social discourse – and this is only possible in a democracy.

Many changes are related to building law, design and space, for example the energy and mobility transition. When it comes to the question of “How do we want to live?” we need social discourse, consensus and compromise – and this is only possible in a democracy. Or let’s take local self-government in the constitution. It enables local authorities to take appropriate account of their individual situation when seeking solutions to overarching issues and thus also to take people with them. That, too, is democracy.

And speaking of democracy: You yourself are Moroccan by birth. What possibilities do you see for people with a migration background to participate more in democratic processes in Germany?

Prof. Lamia Messari-Becker: I confess that your question somewhat implies that migrants per se participate less in the democratic process in Germany. I disagree. In my experience, too few people in general get involved in democracy. Their origin is secondary. Rather, there are many migrants who are committed to democracy and participation because they have often experienced that democratic values are not something that can be taken for granted in their native country. And another thing is important to me: Much would be gained if people with such biographies were more involved simply because of their expertise, commitment, achievements and the work they do, and if all doors were open to them. This creates positive role models along the way, and this in turn contributes to normalisation and moderation – much more than any quota.

“You don’t know the first thing about our laws”. Well, I do!

I had the privilege of advising the German government for four years on the German Advisory Council on the Environment (2016-2020), representing the subject areas of “civil engineering and sustainable urban development”, which are very relevant to the environment. I was the first female civil engineer and practitioner. That was important to me. I may have also been the first person with a migration background, the first councillor with a Muslim-Jewish background in this body. For me, this was of minor importance. But for others it evidently was not. People asked me: “How does someone like you get such an appointment?” And regarding my opposition to the veto of an “intergenerational equity council” in parliament, someone said to me: “You don’t know the first thing about our laws”. Well, I do! I have been living in Germany since 1992, and I dream in German. Everyone should know the constitution, our common foundation, regardless of which religion, language or culture you are also familiar with. They are our laws, after all.

Now to the US election: Joe Biden wants the US to re-join the Paris climate agreement. How do you see this announcement, and what further impetus do you expect in terms of climate protection and sustainability?

Prof. Lamia Messari-Becker: This is good news. It is important to have all nations on board, not least because climate protection can only be solved globally. Global warming can only be stopped if we reduce CO2 significantly. This is why everyone must be involved.

We need a global alliance for the circular economy.

I expect the US, as one of the strongest economic nations, to help drive the greening of the global economy to combine climate protection and progress. We need a global alliance for the circular economy. This is because 40 percent of the African population has no access to clean drinking water, affordable energy, etc., which means resource consumption will increase enormously. We must separate this from environmental damage – through efficiency, an economy of recycling and clean energy. Nothing else will help.

During the preliminary talk you said that you in principle support the climate protests of Fridays for Future – but that you view some things critically. What exactly do you accuse the movement or individual activists of?

Prof. Lamia Messari-Becker: To me, a critical view is not automatically an accusation. I am all for toning down our language a little when we are arguing over the best solutions. The Fridays for Future movement is an expression of an active civil society in a democracy and has made quite a difference. All parties must now adopt a programmatic approach to climate protection. This is also a merit of the Fridays for Future movement.

The fact is, though, that compromise is the essence of a democracy. No matter how epochal the challenge!

From the beginning, however, there were affects that I consider difficult in a democracy. I’m thinking of such statements as “The climate does not tolerate compromise”. The fact is, though, that compromise is the essence of a democracy. No matter how epochal the challenge. This statement was rightly criticised by many people, including former Bundestag President Wolfgang Thierse. We need compromise to keep everyone involved and in this together. I now hear more constructive tones. I hope that in the course of the dialogue the demands will also become less radical, more practicable and more accepted. We can only solve this task by working together, by building bridges, not through conflict.

You are a member of Club of Rome International. What is its contribution to finding answers to the global questions of the 21st century? Are such “elitist circles” in keeping with the times?

Prof. Lamia Messari-Becker: Almost 40 years ago, the Club of Rome raised an important issue on the world stage with its book “The Limits to Growth” – and what do we discuss today? Still the same thing!

The common goal of all members of the Club of Rome is to make a contribution to the sustainable future of humanity.

The club also moved resource scarcity to the centre of attention. A problem that is still completely ignored by many. A number of current impulse papers are worth mentioning, including Climate-Planetary Emergency and Rethinking Finance. Elitist? I don’t see it that way. But it is a limited circle of 100 members, which allows them to work out positions together. And the common goal of all members and honorary members, whether former heads of government, scientists, entrepreneurs, local politicians or pensioners, is to make a contribution to the sustainable future of humanity – this is a deeply social goal, in a global sense.

Prof. Messari-Becker, the final thing we would like to know: How sustainable and resource-conserving is your living environment and are there things you would like to improve in your own home in the future?

Prof. Lamia Messari-Becker: I live in a house from the sixties. Instead of tearing it down, my husband and I – with a huge amount of work and effort – preserved its substance, because it contains a lot of grey energy.

I like to buy vegetables that are not the standard shape. Misshapen vegetables are much closer to their natural state!

As a civil engineer, I know only too well that demolition and new construction is not sustainable per se. We refurbished it and added timber construction. This more than halved the energy we require. The next step is to switch to modern heating technology. Other than that, I like to buy vegetables that are not the standard shape. Misshapen vegetables, which are much closer to their natural state.

Thank you very much for the interview, Prof. Messari-Becker!