Dr. Vjosa Osmani-Sadriu, Acting President of the Republic of Kosovo

“The goal is to see the Republic of Kosovo as a vibrant democracy!”

Dr. Vjosa Osmani-Sadriu, Acting President of the Republic of Kosovo

“The goal is to see the Republic of Kosovo as a vibrant democracy!”

Vjosa Osmani-Sadriu is the Speaker of the Parliament of the Republic of Kosovo. She has been the acting president since the resignation of Hashim Thaçi. In this capacity, the 38-year-old is leading the charge at a challenging time when Kosovo is eager to normalize relations with Serbia, which still does not recognize the independence of its former province. Sven Lilienström, founder of Faces of Democracy, spoke with President Vjosa Osmani-Sadriu about democracy, the Corona pandemic and the Belgrade-Pristina Dialogue. 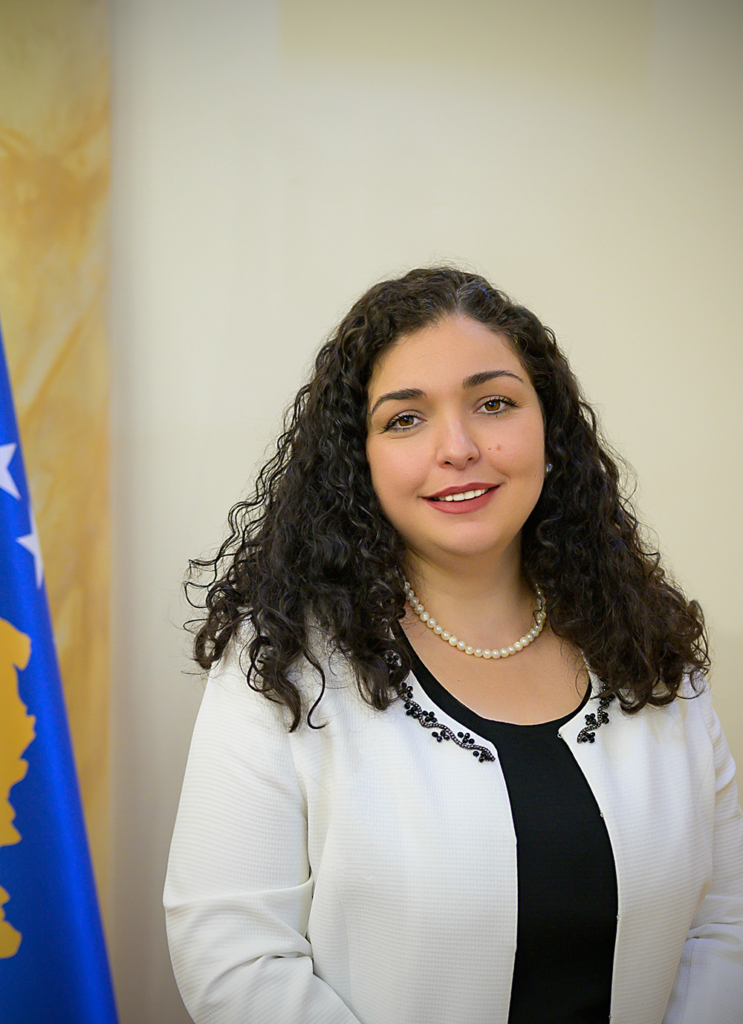 Dr. Vjosa Osmani-Sadriu, Acting President of the Republic of Kosovo | © Office of the President

Ms. President, Kosovo has been a parliamentary democracy with a division of powers since 2008. And so, our first question is: How significant are democracy and democratic values to you personally?

Vjosa Osmani-Sadriu: Democracy is freedom, and freedom is democracy. I’ve always lived by this statement – it’s what I’ve built my political career on.

Kosovo’s history has seen the darkest side of humanity when democracy and freedoms were withdrawn!

Kosovo’s history has seen the darkest side of humanity when democracy and freedoms were withdrawn. It is why we as citizens of Kosovo cherish democratic values so deeply and why I will continue to fight when they are challenged.

The US election results have traditionally had a strong influence in Kosovo. What does the election of Joe Biden and Kamala Harris mean for Kosovo? What do you expect from the new US administration?

Vjosa Osmani-Sadriu: Our young republic has always been extremely privileged to have the bipartisan support of the United States. But it is no surprise that our people are delighted to see President Biden in the White House, alongside Vice President Harris.

President Biden was our voice when we did not have one during the 1990s.

President Biden was our voice when we did not have one during the 1990s and has been a great supporter of our independence and our most recent efforts to strengthen our statehood. Thus, I am confident he will take the time to engage with the issues Kosovo faces today.

The EU Special Representative for the Belgrade-Pristina Dialogue Miroslav Lajčák has been the face of our partner initiative Faces of Peace since 2019. And speaking of dialogue: When and how will the talks with Serbia continue?

Vjosa Osmani-Sadriu: For too long, the daily, most acute problems of the citizens of Kosovo were left aside while the previous Kosovo leaders were hiding behind the topic of dialog to cover up their failures inside the country. We should not allow for that to happen any longer.

Our citizens need justice and jobs, and it is our duty to deliver!

Our citizens need justice and jobs, and it is our duty to deliver. The dialog with Serbia, of course, will also be in focus, and will make sure that our country continues to show its willingness to engage constructively in this important process. The process must be concluded with mutual recognition and with respect for Kosovo’s territorial integrity and its constitutional order.

The Kosovo Albanian Vasfije Krasniqi Goodman told us that the victims of the war in Kosovo are still hoping for justice – but they are disappointed in “The Hague”. Is the international criminal justice system merely a toothless tiger?

Vjosa Osmani-Sadriu: I absolutely agree with Vasfije. The justice system, both domestically and internationally, has failed the survivors of sexual violence during the war in Kosovo. Delivering justice for our victims of the war is a precondition to lasting peace and reconciliation.

It’s about time that the leadership in Serbia stops denying the crimes it committed in Kosovo and elsewhere in Yugoslavia.

I believe that accountability firmly lies at Serbia’s doorstep. Until the Serbian government faces its past and its reality we cannot get justice through any system. It’s about time that the leadership in Serbia unleashes from the „Milosevic mentality“ and stops denying the crimes it committed in Kosovo and elsewhere in Yugoslavia.

The Corona pandemic has been holding a firm grip on the world since early 2020. What is the current situation in the hospitals in Kosovo? Is there enough protective equipment and vaccines, and how did the vaccination programme get off the ground?

Vjosa Osmani-Sadriu: The pandemic has had a devastating health and economic impact across the world, and sadly Kosovo is no different. Without a proper and functional health system, we have naturally found this period challenging – but it has only further strengthened my resolve that we should invest in our health system to ensure we have the right safety net for our citizens.

I am eager to ensure we get a vaccine program in place as soon as physically possible!

I am eager to work with international institutions and our allies to ensure we get a vaccine program in place as soon as physically possible.

Vjosa Osmani-Sadriu: The main goal is to see the Republic of Kosovo as a fully functional state, free of corruption and as a vibrant democracy. A country where the rule of law has true meaning and where all institutions work in favor of the citizens and achieve the highest level of institutional integrity. And of course, a country that is recognized in all corners of the world.

The main goal is to see the Republic of Kosovo as a fully functional state, free of corruption and as a vibrant democracy.

Moreover, we must ensure prospects for our people so that they can see a future and success in their country. As for me, I will do everything in my power to ensure we achieve this!

Ms. President, thank you very much for the interview!