Fabrice Fries (58) has been President of news agency “Agence France-Presse” (AFP) – one of the three largest news agencies worldwide – since 2018. Its 2,400 employees from 80 nations are distributed throughout 151 countries. They report around the clock on world affairs in six different languages. Sven Lilienström, founder of Faces of Democracy, spoke with Fabrice Fries about quality journalism, right-wing populism and the new mission for AFP. 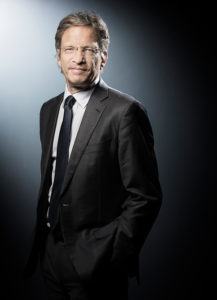 Mr. Fries, the Faces of Democracy initiative wants to support a better understanding of democracy in Germany, Europe, and around the world. How significant are democracy and democratic values to you personally?

Fabrice Fries: Democracy is looking tired at the moment. The rise of demagogues and “strongmen”, the denigration of expertise, the scorn for pragmatic compromise, the polarization of politics – there is now a lot of literature on the malaise afflicting democracy.

Democracy is looking tired at the moment!

Yet, I think it is not difficult to sustain that democracy has a better record than any other form of government, starting with some contemporary alternatives like authoritarian capitalism and “government by experts”. It is often said that one of the great merits of democracy is its capacity for self-questioning, and I want to believe this is key to its capacity to renew itself and its biggest comparative advantage.

Right-wing populism is on the increase across Europe – in France too, the new right-wingers are going on the offensive, rallied by their “rock star” leader, Marion Maréchal. How do you assess the rise of the nationalists in your country?

Fabrice Fries: Many predict that the next elections at the European Parliament will see the rise of nationalists and I am afraid France will be no exception. Beyond France, this could be extremely damaging for Europe. As CEO of a news agency, I cannot go beyond this very general comment as I need to remain non-partisan.

Journalism is a strong player in public debate. But the influence of “fake news” and half-truths is growing. Are we on the way to a misinformed society and, if so, how can this trend be stopped?

Fabrice Fries: I am afraid we have seen only the tip of the iceberg. Fake news reaches an industrial scale in some countries. “Deep fake news” (videos imitating voice and lip moves) is the new issue, with experts speaking of a looming “infocalypse”. Honest, verified information is becoming a luxury good!

News agencies can no longer only report facts: they must now debunk fake news and this is a new mission for AFP. Overall, the best answer to fake news is investment in quality journalism.

The key role of the news agencies AFP, AP and Reuters means that our media outlets mostly report on the same topics. To what extent are the world’s three largest news agencies influencing reporting?

Fabrice Fries: The significant role played by social media in the sharing and distribution of information has greatly enriched and varied the topics reported on by the entire media ecosystem. The three big agencies bring context, explanation and verification to the conversation. But we do not play the same role of “gatekeeper” that we did 20 years ago. It is also fair to say that AP, Reuters and AFP have grown more distinct and different over time, as we have responded to the challenges in the media industry. We have different strengths and positions from region to region. We also tackle stories in increasingly varied ways because we have all evolved from purely B to B providers into multimedia news organizations working for an increasingly large variety of clients.

Since the turn of the millennium the advertising revenues of newspaper publishers throughout Europe have plummeted – in France by 70 percent. In this connection, how do you assess the “yes” vote by the EU Parliament to reform copyright law?

Fabrice Fries: The EU Parliament’s vote is obviously good news, and AFP played its part in lobbying in favor of the directive. But the fight goes on and publishers are going to face very clever lobbying from Google and Facebook, who will try to make neighboring rights ineffective or marginal. I want to stress that our fight is not a defensive move from a corporation that has not been able to adapt: press publishers have invested a lot in order to have an online presence and their online readership has increased dramatically.

The fight goes on and publishers are going to face very clever lobbying from Google and Facebook, who will try to make neighboring rights ineffective or marginal.

But what have not followed are the advertising revenues, which are being absorbed by Google and Facebook in an unprecedented way. This is a double hold-up: the platforms are using our contents without permission and are grabbing the advertising revenues that would allow us to invest in quality journalism. The directive aims at better sharing the value we create. It is as simple as that – and should be common sense!

According to a survey, Germans feel a moral responsibility for their history. On the other hand, leading AfD politicians are demanding an “end to the cult of guilt”. How important is the politics of remembrance as a weapon against right-wing populists?

Fabrice Fries: The clash between history and memory is the key to understanding a number of current controversies, especially in our “old Europe”. It is true in the UK, with the polemics surrounding the Cecil Rhodes statue, in France with the recognition of torture during the Algeria War, and of course in Poland with the law about German concentration camps in Poland.

As far as Germany is concerned, I believe that the relation to history is particularly complex because of Nazism of course, but also because of the lack of a “founding myth”. Last year I read Neil MacGregor’s “Germany: Memories of a Nation”, after seeing the exhibition at the British Museum. It is the best antidote to the rewriting of history, which is a constant temptation.

Understanding history is important, but I believe the challenges we are facing and – more importantly – the answers we can bring, are brand new.

I know it is now common to compare today’s political situation with the 1930s and ask ourselves if fascism is making a return. Yet this exercise has its limits, because the conditions of political life have changed dramatically since democracy was last under so much strain. Understanding history is important, but I believe the challenges we are facing and – more importantly – the answers we can bring, are brand new.

Mr. Fries, our seventh question is always a personal one: what do you like to do most of all in your leisure time and what objectives have you set yourself for the next years?

Fabrice Fries: I am an avid reader and movie junkie. I mostly read literature and history. I am currently finishing Edward St Aubyn’s “Patrick Melrose” semi-autobiographic books and “SPQR”, a history of Rome by Mary Beard. I also love skiing and am planning a Zermatt-Chamonix crossing in 2019.

Mr. Fries, thank you very much for the interview!