Martina Larkin, Head of Europe of the World Economic Forum

“Climate action could become a key election issue in 2020!”

Martina Larkin, Head of Europe of the World Economic Forum

“Climate action could become a key election issue in 2020!“

The World Economic Forum (WEF) in Davos is regarded as one of the most important venues where leading politicians, top managers, and scientists convene from all over the world. Every year, participants debate global challenges posed by economic, health and environment policies. At the 47th annual meeting in January 2017, over 3,000 high ranking individuals took part including numerous heads of state and government such as China‘s President Xi Jinping as well as the British Prime Minister, Theresa May. Sven Lilienström, founder of Faces of Democracy, spoke with Martina Larkin, Head of Europe and Member of the Executive Committee of the World Economic Forum about democracy, climate change and global challenges. 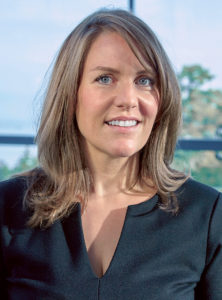 Martina Larkin, Head of Europe and Member of the Executive Committee of the World Economic Forum

Ms. Larkin, the World Economic Forum is regarded as a platform for global democracy. What importance do democracy and democratic values have for you personally?

Martina Larkin: As a European, democracy is a central value of my upbringing, and of our society but today, the very notion of democracy is in decline. The Economist Intelligence Unit’s (EIU) latest Democracy Index 2016 shows 72 countries experienced a decline in democratic values last year. Countries with declining levels of democracy outnumbered those becoming more democratic by more than 2 to 1. The EIU’s ranking shows the average global democracy score in 2016 fell to 5.52, down from 5.55 in 2015 (on a scale of 0 to 10). A little less than half the world’s population lives in a democracy of some sort, and only 4.5 percent reside in a “full democracy.” This is a steep decline from 2015, when it was just under 9 percent.

There is a fundamental global power shift which also manifests itself in different value systems emerging strongly and clashing with traditional value systems of the Western world. We need to better understand what this means for society and for how we deal with global challenges, such as climate change and inequality.

There is a fundamental global power shift which also manifests itself in different value systems emerging strongly and clashing with traditional value systems of the Western world!

There is also the effect of the Fourth Industrial Revolution, especially artificial intelligence, robotics and social media which affect democracy as we know it. Bots for example, with large numbers of followers are ideal conduits for disinformation, sharing fake news within the echo chambers that have grown out of the content display logic of social media algorithms.

In the context of the Fourth Industrial Revolution, we should rethink the concept of democracy as we know it.

We have seen examples of this in the recent US and UK elections where there were reports of Macedonian teenagers operating US political sites to influence news feeds on Facebook and “paid-for attack advertising” targeting specific voters in UK constituencies. So perhaps in the context of the Fourth Industrial Revolution, we should rethink the concept of democracy as we know it.

Be it violations to human rights or the undermining of the rule of law – the authoritarian style of government appears to be experiencing a comeback. Is it acceptable from an ethical standpoint to maintain and develop economic ties with such regimes?

Martina Larkin: The motto of the World Economic Forum is to be inclusive and impartial. We strongly believe in multistakeholder dialogue, and in bringing in different perspectives and voices to address challenges and improve the state of the world. We work with democratically elected leaders from governments across the world, because we believe an inclusive and open dialogue is crucial to address global challenges.

We work with democratically elected leaders from governments across the world, because we believe an inclusive and open dialogue is crucial to address global challenges.

As such we provide a platform for those willing to engage in a constructive discussion but we also urge leaders to be not only responsive, but also responsible to their communities and to society at large.

The motto of the 2017 WEF was “Responsive and Responsible Leadership”. That’s a courageous appeal to the leading global leaders for a commitment against isolation and for more joint responsibility. However, it feels as though little has changed? Am I right?

Martina Larkin: Yes and no. In Europe we have seen a renewed optimism which we haven’t seen in a long time, spurred by the election of Emmanuel Macron, but also with the elections in the Netherlands and elsewhere. This positive momentum has led to a bolder, stronger leadership across Europe and the signs point towards further reform across the continent which will help advance many issues such as security and defense, climate change, inclusion.

In Europe we have seen a renewed optimism which we haven’t seen in a long time, spurred by the election of Emmanuel Macron.

On the other hand, we need to recognise that global challenges such as inequality, unemployment and many other long term issues can not be solved in a year or even two years. There has been important progress, for example on reducing poverty over the past decades, but these challenges will take years if not decades to be addressed and many suggestions which are so easily advocated by the populists across the world provide a false sense of security and deceive people about the complexity, interconnectedness and depth of commitment required to address these issues.

On the other hand, we need to recognise that global challenges such as inequality, unemployment and many other long term issues can not be solved in a year or even two years.

The “Global Risks Report 2017” of the World Economic Forum calls climate change an existential danger and a main driver for the global flow of refugees. Are the climate protection goals agreed upon in Paris without the USA still realistic?

Martina Larkin: First of all, the announcement of President Trump to withdraw the United States from the Paris Agreement on climate change was expected. President Trump is fulfilling a campaign promise he made.

The announcement of the US does not affect the standing of the Paris Agreement!

World leaders, businesses, and others have been preparing for this eventuality since he was elected. Many G20 countries – including China, the EU, Russia, India, Mexico, and Australia – have reiterated their commitment to the Paris Agreement. The announcement of the US does not affect the standing of the Paris Agreement. The terms of the Paris Agreement means that formal withdrawal would likely not take effect until 4 November 2020, the day after the next US Presidential election, as the US must wait 3 years before giving a 1 year notice period of its intent to withdraw. This means climate action could become a key election issue in 2020. At this stage, the US will continue to be a member of the United Nations Framework Convention on Climate Change.

Climate action could become a key election issue in 2020!

While the US administration might have withdrawn their support, there has been strong support from many US cities, states and US businesses pledging their commitment to the goals of the Paris Agreement and they are mobilizing ‘alliances’ and partnerships to deliver the necessary action. Any crisis offers an opportunity, and in this case it offers other nations to step up and increase their role in driving low-carbon investments. Europe could take a strong leadership role here, but also China, especially with developing nations – and as part of its One Belt One Road initiative and recently announced ‘international coalition for green development’.

Following the considerable effort the World Economic Forum has invested in mobilizing a multi-stakeholder approach to climate change, we are working with the UN, French Government, and others, to provide a platform and network to introduce a new paradigm for global climate action – one that integrated businesses and sub-national governments (cities and states) with the traditional international actors (national governments and international organizations).

At the start of July, the G20 summit is taking place in Hamburg. What expectations do you have of the summit?

And on the “just do it!” saying: The simplifying of complex economic and environmental issues by the new US Administration is unsettling to us Europeans. Why are we having so much difficulty with the Americans’ reductionist mentality?

Martina Larkin: The reality is that the world and many global systems like the global financial system or circular economy are complex systems which cannot be reduced to quick and simple solutions without other, perhaps unintended or unwanted consequences. However, this doesn’t mean we can’t also complement long-term strategies with „just do it“ impactful actions. We see a lot of “just do it” attitude especially among the next generation in Europe. They show a lot of enthusiasm, and bring great amounts of energy and passion to the table. Our Shapers community, which consists of over 7,000 young people under the age of 30 across the world, is leading many projects across Europe and other continents which are action oriented and deliver concrete results.

We see a lot of “just do it” attitude especially among the next generation in Europe.

One of them is the Refugee Fun Day launched by the Nicosia Hub, and now replicated by several other Hubs in Europe. Asylum seekers suffer from social exclusion and isolation due to lack of entertainment activities. Since May 2016, Nicosia Shapers regularly organize one-day events full of activities for kids and adults who reside at the Refugee Camp in order to help them overcome anxiety and homesickness. Moreover, the project aims to raise awareness about the situation at the camp and eliminate the stereotypes about refugees and migrants within the Cypriot society. It consists of volunteers holding different fun and educational activities such as dance, art, music, tennis, yoga, painting, story-telling, language and various other workshops.

Ms. Larkin, when is the planning phase going to get underway for the 2018 World Economic Forum and how do you physically and mentally prepare for the next meeting in Davos?

Martina Larkin: Some of the planning for the next Annual Meeting starts already as the previous one ends. But it is important to see these meetings for what they are, a milestone, albeit an important one, but still just a milestone in a much broader, long-term engagement with our partners, communities and stakeholders to advance global, regional and industry agendas.

I would describe our preparations more like a flow, where each element leads into another to grow and develop in relevance and impact.

This means, we are working all year round on issues of how to tackle poverty, address climate change, develop innovative solutions for issues such as food security, women’s empowerment etc. I would describe our preparations more like a flow, where each element leads into another to grow and develop in relevance and impact. So this means, at the Forum we all have to be mentally and physically fit year round, like an athlete, we cannot just train a month before a big competition, but we have ongoing training and competitions where our mental and physical strength is tested. I personally like to balance sports activities like running, swimming or hiking with mediation and relaxing, more reflective activities to train and strengthen the mind as well as the body.

Many thanks for the interview, Ms. Larkin!